THE INVASION OF PROHIBITED/ABUSIVE STAMP ISSUES

We publish the results of our research of Internet sources that contain information about the abusive stamp issued by The Solomon Islands Post between the years 2013  2015. The results are mind-boggling, so that the invasion term used in the title is fully justified.

The Invasion of the Abusive Stamps

Out of sheer curiosity, I was browsing online the Linn's Stamps News Weekly - Scott New Listings Update of September 21, 2015. On its pages 79 to 84 I suddenly found listed a huge quantity of stamps issued by a one and only country, the small Solomon Islands from Oceania.

Intrigued by what I saw, I decided to invest some time in the counting of the philatelic material that was listed in the catalogue. Below are the astonishing results of this investigation: 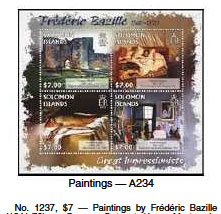 •  Stamps in Sheets of 4, per successive sets

Therefore the Solomon Island Post issued on average roughly 500 different stamps and 150 different S/S per year, as well in 2013 as in 2014, this accordingly to the Scott catalogue that listed them in 2015!

Solomon Islands stamps on the WNS

The WNS is the abbreviation for the WADP Numbering System, developed by the World Association for the Development of Philately (WADP) and the Universal Postal Union (UPU), and introduced in 2002. Link. Its initial goal was to stop the proliferation of illegal stamp issues. This goal wasn't achieved. In 2003 the UPU published eight Circulars concerning the illegal issues, and in the first nine months of 2015 a number of seven such Circulars. Source

Back to the abusive issues, in the year 2013 a number of 239 Solomon Islands stamps (actually only those that appear on the S/S) were registered with the WNS. This was a big change of the Stamperija Ltd policy, the official agent of the Solomon Islands Post (see below for more information) that in the near past advised its commercial partners, the postal administrations, against such registrations.

The set Impressionists' paintings, 2013, Solomon Islands. It is listed here on the WNS.

- The Sheets of 4 are not registered with the WNS, which explains the difference in numbers of stamps in set when compared to the Scott listings.

It was introduced in 2008 and it was approved by all member countries of the UPU.

7.6 Establish separate contractual provisions for the printers entrusted with producing the stamps and the agents responsible for marketing them.

The Philatelic Code of Ethics can be downloaded from here

Stamps that infringe on the above provisions are not sold by the national philatelic services but by agencies or private companies, often located outside the country.

The Solomon Islands Post is not an exception. On its web site it sends its potential customers to buy stamps issued after 2012 directly to the Stamperija site. After discovering the huge number of stamps issued so fast by the Solomon Islands Post, the discovery that their agent is the well known Lithuanian company Stamperija was our second big surprise!

The link from the Solomon Islands Post site to the Stamperija site (their stamp dealer, located in Lithuania) is here .

The Solomon Islands' F. Basille paintings are obviously sold on the Stamperija site too (this is just an example). The image below can be found here . 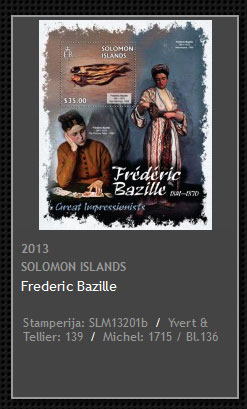 Stamperija also as a printer

Stamperija is also a printer, as mentioned for example here 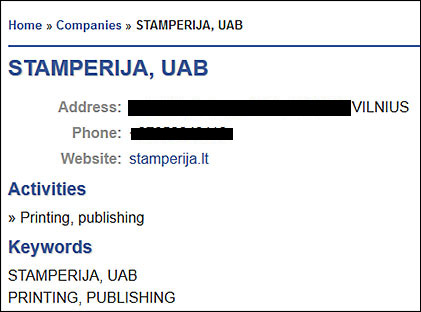 Fig. 6. The source changed its link

We infer that it is not certified as security printer because it doesn't appear on the list of certified printers, mentioned above.

Its role as printer of Solomon Islands stamps is beyond doubts, because it is clearly mentioned on the WNS site, for example here (see the first image on this page too):

How do then the Solomon Islands Post and their dealer & printer Stamperija both comply with the provisions of art. 7.6 - 7.7 of the Code of Ethics mentioned above? No way!

Some information about the Solomon Islands

The Solomon Islands, a former British protectorate in the Pacific, is striving to recover from a civil conflict that brought it to the brink of collapse. The World Bank says the Solomon Islands, one of the Pacific's poorest countries, has been hit by successive global food, fuel and financial crises. 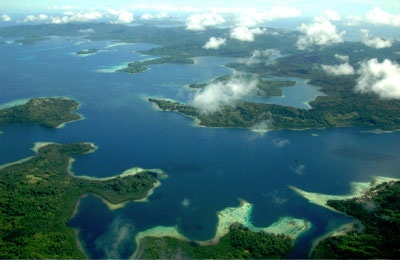 One can wonder why do need the about 600,000 inhabitants of Solomon Island 500 different stamps and 150 different S/S each year? Because they don't actually need them and for this reason don't use the most of them, we can infer that they were issued to milk the least informed, the most naive stamp collectors worldwide.

Because they infringe on the UPU regulations, they fall into the category of Prohibit -> Abusive stamps, as defined by the Fight against Fakes and Forgeries Commission of the Fédération Internationale de Philatélie (FIP) . Link

From Scott New Listings Update, August 15, 2016, LINNS.com, pages 82 - 84, we learn that in 2015 Stamperija issued for the Solomon Islands the Souvenir Sheets of four numbered 1770 to 1974. That means over 200 different sheets of four, or 800 different stamps, were issued only in 2015. Add to them 200 MS. All this is listed in Scott, in a very small print, but what counts for the agent/seller/printer is that it can attach Scott numbers to its large scale production and offer them for sale to unsuspecting worldwide stamp collectors. Just as an example, a set of Animals (1015, June 26, 20 sheets of 4 and 20 MS) is priced together by Scott at $ 450.00. Mind boggling!

I saw on the Stamperija site by chance what Guinea stamps they propose, the ones issued by them so far only in 2015. I show below the first:

and the last sets available on the Stamperija site.

We can see that the first ones already have Michel catalogue numbers, and this numbers are huge! From the Stamperija own numbers we can easily infer that in 2015 the agent Stamperija produced so far 212 sets, containing 848 stamps and 212 S/S. A set being sold on eBay for about US$ 20, a collector who would like to have all sets would pay for them about US$ 4,000.

One may wonder why so many Impressionists' paintings were presented on the Salomon Islands stamps. Well, Stamperija is not alone in producing stamps that have nothing in common with the issuing countries. Let's take a look at just two S/S produced by the largest of agents, the Inter-Governamental Philatelic Corporation (IGPC). After Wikipedia: " IGPC claim to produce nearly half of the different postage stamps issued each year but have been criticized for inappropriate and excessive issues." Link

The above creation, on the left, presented by IGPC at the Rossica exhibition in Russia, shows polar bears on a S/S issued by Micronesia, another subregion of Oceania, comprising thousands of small islands. Micronesia has a warm, tropical marine climate, inadequate for polar bears. Another IGPC product, presented also at Rossica (above, on the right), was issued under the name of Mustique, a private island of Grenadines, population 500 to 1300. The climate of this Caribbean island is tropical and for this reason one won't find there some exotic animals of the tundra. As the Russians say, the paper endures all...

The watchdog role of some large organizations

In a few words in the best case they do nothing. It is the typical attitude of the AIJP (the Philatelic Journalists), where none of them writes about the Prohibited stamps, or of the FIP , that generally doesn't care for years, with the new and notable exception of the Secretary of the Commission, mentioned above.

The ASCAT (catalogues' editors association) lists these stamps through the international catalogues, and the catalogue houses (like Yvert, Michel, Scott) make money thanks to them.

The WADP, through the UPU philatelic team, lists these stamps on the WNS , and makes some money too. Thus they violate the very Code of Ethics that UPU elaborated many years ago. The only positive result is the publication of the UPU Circulars on illegal stamps, even if these Circulars have a rather limited impact.

Those who participate in the proliferation of abusive stamps massively contribute to legitimize them. Those who do nothing contribute to the same by abstaining from their preventing role and from protecting thus the most vulnerable of stamp collectors.

Everyone is playing for years its usual role, and meanwhile the number of organized stamp collectors is in free fall.

You, the stamp collectors, are on your own, because none philatelic or stamp issuing organization cares about your interests. Therefore keep well informed and avoid all those illegal and abusive stamp issues!

(*) About the author. Victor Manta is the founder and the current president of the PWO. He is mostly interested in thematic (topical) stamps and in the philately on the Internet. His philatelic sites were multiple awarded in websites philatelic competitions. He is also a well known philatelic journalist, who published numerous philatelic articles on the Web and in printed magazines.

•  This is a piece of philatelic journalism. It is protected by the free speech and by the liberty of the press doctrines.
•  Some very short excerpts or small images are sometimes used for illustration/teaching/criticism/commentary purposes only, to properly inform the worldwide readers.
•  The fair use doctrine is fully observed. Each excerpt is properly attributed and respects the rights of the copyright owners.
•  We will immediately correct any piece of information that will be proved false. When we use information provided on some official sites, we expect that it changes there (not just disappears due to the volatility of web pages) before we make changes on this site.

Links to related articles published on this site: